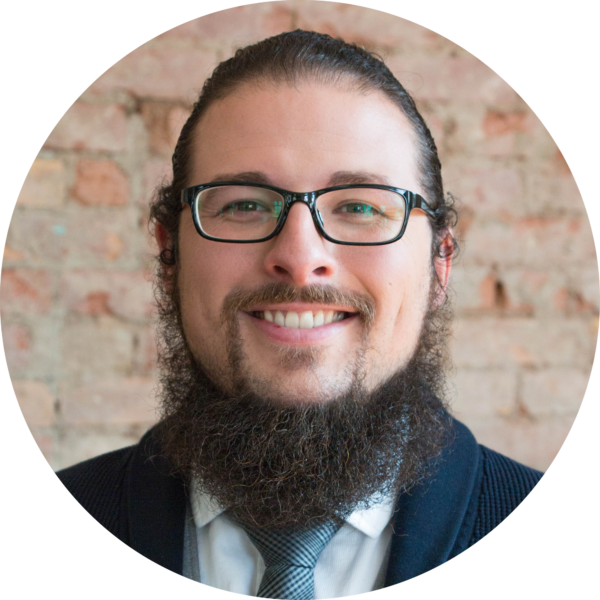 Jared A. Brock is the author of A Year of Living Prayerfully, Bearded Gospel Men, and The Road to Dawn. He’s happily married to his best friend, Michelle, runs a documentary production company, and is the director of Over 18, Red Light Green Light, and Redeeming Uncle Tom: The Josiah Henson Story. Jared has been interviewed on TODAY.com, CBS, CTV, CBC, 100 Huntley Street, and The 700 Club, and his writing has appeared in Esquire, Huffington Post, Smithsonian Magazine, Elite Daily, and Writer’s Digest. He also writes regularly on Medium. Upon discovering Josiah’s cabin just a few hours from his home in Ontario, Brock set off on a 3,000-mile journey to re-trace Josiah’s journey from slavery to freedom.

Interested in having Jared Brock speak at your university, conference, religious institution, or community event? Here's what previous hosts are saying. Get in touch with us here or email contact@josiahhenson.com.

This sweeping biography about the man who was the inspiration for Harriet Beecher Stowe's Uncle Tom's Cabin is an epic tale of courage and bravery in the face of unimaginable trials.

The Road to Dawn tells the improbable story of Josiah Henson – a dynamic, driven man with exceptional intelligence and unyielding principles, who overcame incredible odds to escape from slavery and improved the lives of hundreds of freedmen throughout his long life. He was immortalized by Harriet Beecher Stowe in her 1852 novel Uncle Tom's Cabin and catapulted to international fame, though his story has been lost to history. Until now.

In the first major biography of Josiah Henson ever written, The Road to Dawn chronicles Henson's forty-two years spent in bondage and his eventual escape with his wife and four young children, carrying the youngest two on his broken shoulders for 600 miles, eventually settling with his family as a free man across the border in Canada. Once there, Henson rescued 118 more slaves, including his own brother, and purchased land to build what would become one of the final stops on the Underground Railroad, a 500-person freeman settlement called Dawn.

Drawing from more than 1,000 source documents and dozens of expert interviews, The Road to Dawn retraces Henson’s path from slavery to freedom and restores a hero of the abolitionist movement to his rightful place in history.

Endorsements for The Road to Dawn

“Jared Brock's biography of Josiah Henson is a laudable attempt to piece together the story of a man nearly lost to history and broken by slavery. The Road to Dawn is sure to become required reading in the archives of African American history.”

“Harriet Tubman [and] Frederick Douglass are well known figures in the abolition of slavery. Josiah Henson was less known. Here was a man who had spent more than 40 years in slavery but promised to use his freedom well. He delivered on that promise. Jared A. Brock takes us through the life of a hero of the abolitionist era who overcame unspeakable pain and adversity to make an impact on his home country. A must read.”

—Ameenah Gurib-Fakim, President of the Republic of Mauritius

“Josiah Henson made a vow to use his freedom well, and his successful legacy serves as an inspiration long after his lifetime. As a descendant of once-enslaved Americans who also used their freedom well, I hope many will join me in reading the vital message of The Road to Dawn."

“Finally, a biography worthy of the man. The Road to Dawn elevates Josiah Henson to his rightful place among important international liberators and frees him from the grip of ‘Uncle Tom.’ Black history, when properly told will transform your life and your thinking."

“Authoritatively researched and meticulous in its detail, The Road to Dawn captures the fierce determination and undeniable presence of one of Canada’s extraordinary pioneers for freedom and social justice. Jared Brock’s passionate narration enhances Josiah Henson’s rightful place as a figure of national historic significance.”

“The Road to Dawn is an engaging and accessible biography of Josiah Henson, a forgotten hero of abolitionist history whose freedom narrative inspired Stowe’s internationally famous antislavery novel Uncle Tom’s Cabin. Brock has brought to light the powerful experiences which shaped Henson’s life and fight for freedom.”

“Jared Brock has made a truly original contribution to the literature on slavery with his page-turning biography of Josiah Henson, an American hero whose story until now was largely lost to history. The Road to Dawn offers a heartbreaking, yet compelling account of America’s original sin, as experienced by a man who grew up enslaved, found his way to freedom, and inspired a generation of abolitionists, including Harriet Beecher Stowe. It is a story I will not soon forget."

—Corban Addison, international bestselling author of A Walk Across the Sun and A Harvest of Thorns

"The Road to Dawn is a deeply moving and inspirational biography of a little-known Underground Railroad hero. Jared Brock does a fabulous job of bringing Josiah Henson to life. A must-read for everyone."

"Josiah Henson was a liberator, an innovator, and one of our nation’s first social entrepreneurs. The Road to Dawn is an important and compelling story."

"Josiah Henson comes to life in Jared Brock's ground-breaking biography on one of the most famous figures of the nineteenth century. The Road to Dawn will ensure that Henson's story is never lost again."

“The story of Josiah Henson is beyond fascinating... a must read in the telling of slave history, American history, and the interconnectedness of American, Canadian, and British links to slavery and freedom. Henson's story is beyond the savagery of an institution that sought to maim, suppress, and even destroy a people, but about resistance, triumph and recovery. The Road to Dawn is able to capture that story through Josiah Henson's trials, tribulations, and ultimate triumph from slavery to freedom. More importantly, The Road to Dawn separates myth from fact, the myth of ‘Uncle Tom’ and the reality of Josiah Henson and all that he accomplished, in slavery and in freedom. His story is worthy of being told.”

“The Road to Dawn is an honest and moving portrait of one of our nation’s greatest unsung heroes. Jared Brock's biography will bring much-deserved attention to Josiah Henson's epic life story, serving as a reminder to what can be accomplished when we fight on the right side of history.”

"The Road to Dawn tells the story of a courageous man who pursued the common good in spite of painful wounds, discouraging setbacks, and personal flaws. Josiah’s winsome character and role within the broader abolitionist context keep us turning the page, as does Jared Brock's fine storytelling about this American storyteller. And these stories remind us that we have much to learn from those who embody the message of justice and mercy, whatever their flaws or fortune may be."

—Timothy B. Tyson, Senior Research Scholar at the Center for Documentary Studies at Duke University, author of The Blood of Emmett Till and Blood Done Sign My Name

“Jared Brock brings to life the struggles and perseverance of a man almost forgotten in history. This well-researched book documents the life of Josiah Henson, whose experiences in Maryland, his escape to Canada, and his work on the Underground Railroad reveal a man of incredible fortitude and determination.”

“The Road to Dawn re-introduces the world to a man whose life story fueled the abolition movement in 19th-century America. In doing so, Jared Brock issues a clarion call to readers to stand for the oppressed, right now as never before. His timing couldn't be better.”

—Julia A. King, Professor of Anthropology at St. Mary's College of Maryland

“Authoritatively researched and meticulous in its detail, The Road to Dawn captures the fierce determination and undeniable presence of one of Canada’s extraordinary pioneers for freedom and social justice. Jared Brock’s passionate narration enhances Josiah Henson’s rightful place as a figure of national historic significance.”

“Josiah Henson suffered more than forty years at the hands of unbelievable cruelty and violence, yet went on to impact the world in profoundly important ways. As a personal survivor of modern day slavery, I heartily endorse The Road to Dawn's inspirational message of hope, justice, and reconciliation.”

“Josiah Henson's riveting life story challenges us to fight injustice and never despair. Thanks to The Road to Dawn, a local hero has finally re-appeared on the international stage.”

“I learned additional history of the fight for freedom by reading Jared Brock's book, The Road to Dawn. I now know that Josiah Henson was a courageous trail blazer and a pioneer for our people seeking freedom in a new world into which they were enslaved.”

“Jared Brock's biography of Josiah Henson brings to our attention another slave narrative of one of history's great abolitionists. For too many years, the contributions of African-Americans to our society were minimized or hidden. Brock captures, in the biography of Henson, the triumph of the human spirit over slavery and of man's inhumanity to man. Henson exhibited an indefatigable determination to live a life dedicated to the realization of educational opportunities and self-sufficiency for all. We can never know too much about those who paved the way and about those upon whose shoulders we stand.”

“Jared Brock’s remarkable The Road to Dawn is an important antidote to the sanitized (and very white) version of American emancipation and reconstruction. While the life of Josiah Henson was the inspiration for Uncle Tom’s Cabin, it was very much more than that. Henson was a liberator, leader, thinker, organizer, and prophet, and we should ask why he was displaced from his proper place in the history of abolition. Brock gives us a key to a crucial component of antislavery's usable past, the unvarnished lessons that will help guide today’s efforts to bring slavery to an end.”

For press inquiries regarding The Road to Dawn, please contact Brooke Parsons at brooke.parsons@hbgusa.com.